Trouble in an Inclusive Oasis

An incident that occurred last month at a cannabis dispensary and lounge in Palm Springs has led to people questioning what really happened and asking if this was just a lack of customer service or something bigger.

The situation came to light about an incident that happened at the Four Twenty Bank Dispensary & Lounge in Palm Springs, CA, as the establishment was closing following an evening of country music in the lounge. There was a patron who wanted to use the restroom as the establishment was being cleared out at the end of the night, as is customary. The independent security guard used by the business was conducting their usual sweep when the patron approached to say they wanted to use the restroom. Staff never denied the patron from using the restroom as he was sked to not video tape self while in the restroom. Staff addressed them based on the name on their ID, which turned out to be the “dead name” of the self-identified transgender male. The ID checking systems in dispensaries does not note the gender marker, only the person’s legal name, which in this case, has not been replaced by the self-identified name of the patron. Nonetheless, the co-owner of the Four Twenty Bank attempted to intervene as the situation became escalated and could not disarm the complaint given the emotional state of the patron who was feeling that the staff was being transphobic. 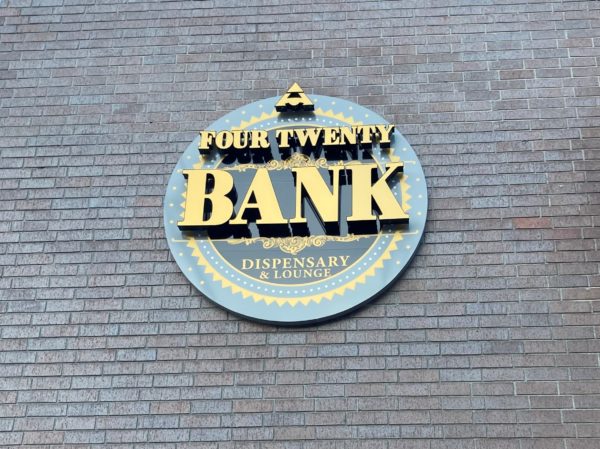 It was a shock to watch the video and subsequent videos by the visitor from Yucca Valley. But let’s set the emotion aside and see if we can provide some reasonable assessment of what happened.

Having spoken with a number of people in cannabis industry, there is some disbelief that this could occur in a cannabis dispensary, especially in an inclusive community like Palm Springs. Cannabis is inclusive, to sum it up. It is common knowledge that anyone who visits a dispensary/lounge will find that they tend to be a chill experience.

It’s not easy unpacking a video on social media when someone who cares about their choices is seen ranting and going off on a business owner who truly was trying to diffuse a situation. Let me start by saying that co-owner of Four Twenty Bank Dispensary & Lounge was just as shocked by the accusation of being transphobic and treating someone unjustly. This goes against everything the community knows about Ms Montante. She and her businesses have long supported the LGBTQ community and has made it a point for over 30 years that her staff know and understand the customers and patients who visit her establishments.

In an attempt at what appears to be a failed cancel-culture event, people have been quick to judge both the patron and the business owner. To clarify, we looked into the history of when people were able to change the gender marker on the legal ID. When the Gender Identity Bill, SB-179 (CA), was signed into law in October of 2017, it allowed for people to petition and attest to their personal gender identity and provided a legal framework for their state issued ID to be either M-male, F-female or X-non-binary. The “X” marker is, in general, used for transgender people to self identify as neither of the other two choices, and allows for a new birth certificate to be issued under that choice.

We also connected with Thomi Clinton, Chief Executive Officer of the Transgender Health and Wellness Center in Palm Springs, CA which opened in 2018 to provide services for the Inland Empire Transgender, Intersex and Gender Diverse Community. Thomi is a transgender woman who in a previous life was a gay activist advocating for civil rights working with Lamda Legal.

Thomi explained that the world of gender identity we live in as cisgendered people (identified as either binary male or female) can be very confusing, even for people who are in the process of identifying as transgender. According to Sexual Orientation and Gender Expression in Social Work Practice, edited by Deana F. Morrow and Lori Messinger (2006, ISBN 0231501862), p. 8: “Gender identity refers to an individual’s personal sense of identity as masculine or feminine, or some combination thereof.”

Transgender people have a gender identity or gender expression that differs from the sex that they were assigned at birth. Some transgender people who desire medical assistance to transition from one sex to another identify as transsexual.

It makes one wonder how are we to know from an ID how the person identifies. As Thomi explained, “the State does it” meaning the State of California, in this case, changes an existing ID sex marker. You cannot just scrape it off with a coin or knife. “The State now has three gender markers because of because there was a Federal Court case of an intersex person,” Thomi stated. The case she was referring to was  Zzyym v. Pompeo (formerly Zzyym v. Tillerson & Zzyym v. Kerry),  a federal discrimination lawsuit was filed against the U.S. State Department on behalf of an intersex client, Dana Zzyym Lamda Legal inn October of 2015. Dana, according to the Washington Post had applied for a U.S. Passport in Colorado. The U.S. Passport Office the part of the State Department that issues official passports for people who plan to travel internationally. Dana had filled out the application and instead of checking the M or F boxes, they put an “X” and explained that they were neither male or female. In 2019, California SB179 was passed specifically as it states “It is the policy of the State of California that every person deserves full legal recognition and equal treatment under the law and to ensure that intersex, transgender, and nonbinary people have state-issued identification documents that provide full legal recognition of their accurate gender identity.” This made it into law that the official California ID or driver’s license would have the additional gender marker as a government issued document. In 2020, U.S. Court of Appeals for the Tenth Circuit ordered the State Department to reconsider its prior decisions denying Zzyym an accurate passport. In that ruling, the court noted that forcing intersex individuals to pick a male or female gender marker in the passport application “injects inaccuracy into the data.” This past June, the State Department changed their policies and allowed for people to check a box with “X” allowing people who identify as anything other than male or female.

These changes have made it critically important for businesses of all types to seek out education on X-gender people as customers or consumers of their products and services. Thomi tells us “businesses should be aware and educate staff and independent service providers to think inclusively when serving all.” As for the alleged civil rights violation at the Four Twenty Bank, Thomi says it would be difficult to litigate a misunderstanding especially since check-in systems are HIPPA protected and do not track gender markers. It’s likely that when personnel reviewed their check-in, all they saw was the female name on the ID which had not been changed for the self-describe transgender male.

Thomi informed us that she had spoken to the patron of the Four Twenty Bank as well as had reviewed security footage showing the patron entering and exiting the men’s room on more than one occasion in the days prior to the incident.

As for the misgendering issue, Thomi spoke to the Four Twenty Bank and recommended that “we set up a training and education, and create some policies around this so that you can make sure that when you have some contact with some trans people that they are treated at the level of a place that we could call trans-inclusive.”

Thomi attempted to bridge the communication gap between the Four Twenty Bank, while the patron decided that the best course of action was an attempt at rallying others to boycott the Four Twenty Bank. Thomi informed us that it is clear from the interaction that the patron was clearly not interested in creating dialogue to bring education and empathy in moving transgender understanding forward. “I saw that there was another way that we could do it and bring more people to be an ally of the trans community instead of creating more people hating us,” Thomi stated.

Ms Montante told us that she is “open to having a conversation with the patron when they apologize for the way they have gone at attacking me and our business when they don’t know who I am, where I stand in the community and, the support I bring through plant medicine for the LGBTQ+ community in Palm Springs.”

The bottom line is that we need to bring understanding to situations like these and see what can be learned from an unfortunate incident.

IF YOU ARE TRANSGENDER OR KNOW SOMEONE WHO IS LOOKING FOR SERVICES, IS DEALING WITH ISSUES OF SELF IDENTITY OR NEEDS TO TALK ABOUT BEING TRANSGENDER/TRANSEXUAL, PLEASE CONTACT THE TRANSGENDER HEALTH AND WELLNESS AT 760-202-4308 OR VISIT TRANS.HEALTH.

Previous Post
Don’t Change Black Women, Change The System That Strips Us Of Our Humanity