Don’t Change Black Women, Change The System That Strips Us Of Our Humanity 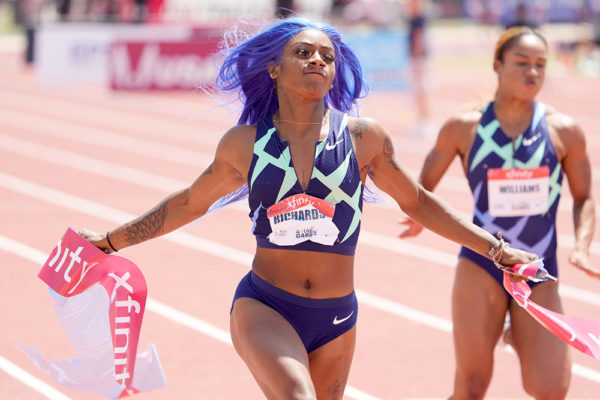 Most of us have heard that Sha’Carri Richardson was suspended after testing positive for THC, one of the components of cannabis. She used cannabis as part of her healing process after learning of the death of her biological mother from a reporter. This resulted in her being stripped of her win in the Women’s 100-meter Olympic trials, and she will not be able to compete in the 2021 Olympics in this race. It’s still up in the air if she will participate in a relay.

Sha’Carri responded with an apology, but it IRKS MY SOUL that she felt like she had to apologize for simply taking care of herself.

Cannabis has always been and always will be medicine!

The record-breaking athlete and Black woman tweeted: “I am human.” It is, in fact, necessary to make that statement. Too often, Black women are seen as survivors that need to overcome tragedy after tragedy, then rise up and keep going without the time or resources to heal like a normal human.
When President Biden was asked about the ruling of the Olympic powers that be, he responded: “The rules are the rules and everybody knows what the rules were going in. Whether they should remain the rules is a different issue, but the rules are the rules.”

Dear President Biden:
With all due respect, straddling the fence is not acceptable on this issue. Your lack of advances in the area of cannabis is detrimental to the health and prosperity of the marginalized people you say your support. There are a lot of rules in our country that victimize people in favor of profit. We elected you to change them, not to defend them!

Slavery and Jim Crow laws were once accepted rules. During that time in history, would you defend those rules or would you change them? Well today, your statement says that you choose to perpetuate the mindset that Black women should sit back, take what we are dealt, no matter how unfair it is, and survive, instead of being given the grace to be human. It is my hope that you will change your mind and not let that be your contribution to history.

What may be even worse than the leader of the free world making these types of statements is our own community internalizing that fact that we are somehow less than human, undeserving of fair rules and proper healing.

I feel your pure intentions when you defend Sha’Carri by saying that you too have done wrong when you were young, but PLEASE STOP. Sha’Carri did nothing wrong. The system is wrong! Instead of implying that she needs to change, demand that this unjust system change.

It’s time for them to let Black women be human. #LetHerRun
-Dr. Kaya

Dr. Kaya is an emergency medicine physician who works to bring reparations to her people and holistic health to all people via cannabis. Her work involves education on the cannabis industry, education on the health properties of the plant, and cannabis advocacy.

You can support her work with 40 Acres And A Dispensary, an organization that educates and equips Black entrepreneurs to take advantage of the opportunities in the cannabis industry. The goal of the organization is to build generational wealth in the Black community, so that wealth can be used to decrease health and social disparities. You can donate to this cause at the link below.